Can you derive the pronunciation of Hebrew words from their Hebrew spelling?

I would like to find and/or create a pronunciation dictionary of Hebrew words. I can find a frequency list of 400,000+ Hebrew words on Wikipedia, but there are no pronunciation guides. Is it possible to take those words and derive a pronunciation from it I I know certain rules? If so, what are the rules for pronunciation or where can I find the rule lists? If not, then what are some common exceptions to rules (like in English how "boot" and "look" have "oo" pronounced different, there is no easy rule that tells us this, it is based on memorizing individual word spelling/pronunciation pairs).

Hebrew is very consistent in its vowel structure. A list of shoresh's is probably more appropriate for your needs than a list of 400,000 words. The Shoresh retains its basic meaning whether it is a noun, verb, etc. The vowels used in the shoresh is based on inflection.

I would recommend memorizing the vowel pattern of the different inflections. Then learn to apply that to the shoreshes.

If your goal is to read the Tanach, as in Ancient Hebrew, I would recommend "The Vocabulary Guide to Biblical Hebrew and Aramaic" by Miles Vanpelt. The book lists the most commonly used Shoreshes so that you can memorize their meaning then apply the vowels as is appropriate for the sentence.

If your goal is to learn modern Hebrew, I would start with A.Friedman's 840 Tables of Hebrew Verbs. He supplies the shoresh and its modern meaning as well as the verb.

The vowels in the name of the binyan is your cheat sheet. Not that I like rap, but memorizing the vowels to a rap beat was an incredible help. I would then apply the same beat to the shoresh and properly apply the vowels.

If you have the shoresh, you can look up all the forms the shoresh will take on pealim.com. For instance, salt would be https://www.pealim.com/dict/4333-maluach/

The website provides a virtual keyboard so that you can either type on your keyboard or click on the letters of the shoresh for look-up. The website also provides an English transliteration of each word, along with the accent. 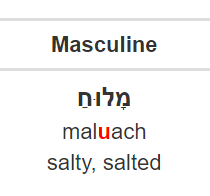 The optimistic answer you got from the previous responder reflects his assumption that your text is voweled. If that's true then your problem is very easy. In fact you don't even need a lookup table, you can generate the pronunciations (in 99% of cases) programmatically as you would for Spanish or Italian.

Unfortunately, the only voweled texts are the Bible, poetry and children's books. Everything else is unvoweled, and since you mentioned the Wikipedia corpus I have a feeling unvoweled text is what you're after.

In which case your problem goes from very easy to very hard (as in AI hard). And that's because Hebrew (unlike English) is full of heteronyms. Indeed you can't read Hebrew at all unless you understand the context.

Going right to ×žÖ¸×ś×•ÖĽ×—Ö· (the word the previous poster gave you), without those vowels it can be either "maluach" (salty) or "miluach" (from a board).

Not the answer you're looking for? Browse other questions tagged hebrew or ask your own question.