Explaining the difference between 'very' and 'too' to native Chinese speakers

The Indo-European languages that I know (Dutch, English, German, French, Spanish) all make a distinction between "too" (meaning "to a higher degree than is desirable, acceptable or allowed") and "very"(it is "used for emphasis").

However, I have noticed that at least two of my Chinese language partners did not make this distinction when speaking German. For example, while looking at the price of a book on a website, one said, "Oh, too expensive." On another occasion, another said, "I'm too tired", but upon further questioning, it turned out that she meant "very tired".

When I asked one of my language partners explicitly what the difference was between "zu" (German for "too") and "sehr" (German for "very"), he answered without a shred of hesitation that they meant the same thing. (The origin of this confusion - from a Western point of view - appears to be that 太 tài can be used to mean either.)

Sometimes an image speaks to people. Maybe try something like this. 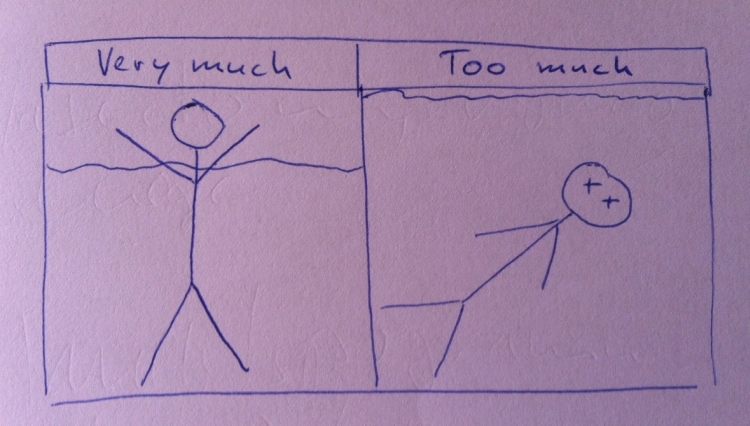 The basic difference in English is just that "very" does not say whether the amount is good or bad or just right, while "too" says the amount is bad and less would be better.

But nuance comes into it. If I say "the soup is very salty" people will usually understand me to mean salty soup is not good, the same as if I had said "the soup is too salty."

If I say "you are being too nice to me!" people will usually understand me to mean being nice always good and I could as well have said you are very nice to me.

The nuanced expressions get some of their force from the fact that they go against the basic meaning of the words.

But the basic difference remains: unless there is some clear implication from the context, "very" does not say whether the amount is good or bad, and "too" does say it is bad.

If I say "you are too nice to me, you should stop" then again people will ask me to explain: is there something wrong with being nice?

I have learned "too" as 太 (tai) and "very" as 很 (hen). But if 太 can be used as both, I would suggest explaining the difference as the difference between these answers when someone is asking you if you are up for doing something:

"I'm very tired" and "I'm too tired" is the same difference as between saying "我是太累了" and "不，我是太累了".

The difference is in the inherent "no" or "too much" when saying "too" instead of "very".

Not the answer you're looking for? Browse other questions tagged multiple-languages teaching chinese or ask your own question.

10
Is there a term for the prestige language that's learned more-or-less natively?
12
Is it easy for native Japanese speakers to remember simplified Chinese characters?
11
How can I overcome fear and failure when speaking to native speakers of my L2?
8
List of Chinese “verb plus object” verbs?
15
How was the Foreign Service Institute (FSI) list of language learning difficulty compiled?
4
How long between each HSK level for learning Mandarin?
0
Simultaneous intensive summer course in German and French? Or is it too much?
1
What are some of the best ways to get a toddler started learning Chinese in a non-native home?