According to scientific research, which languages take the least time to learn for a native English speaker?

Basically what I'm just asking in the question's title. By learning a language, I mean being able to fluently speak it, understand it, write it, and read it. I would think French or German. Please include references to scientific research in your answers.

According to the Foreign Service Institute (FSI), there are categorical rankings of difficulty in learning a language relative to English. A list can be found here with approximate time to become adequate in that language.

Another concept closely related to this is Linguistic Distance. Linguistic distance involves how similar one language is to another (though most implementations of calculating this focus on vocabulary) with regard to some linguistic feature (usually wordbase). The similarities can be calculated mathematically using Levenshtein Distance.

For example, from the Wikipedia article: 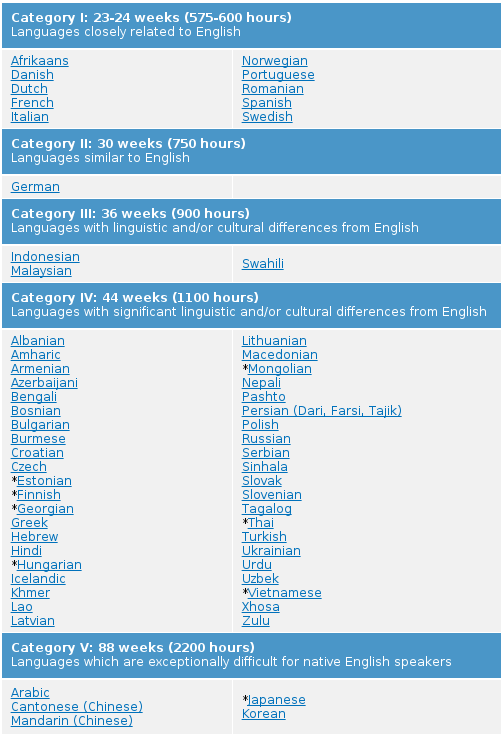 It is reasonable to argue that Norwegian or Afrikaans are the easiest, and therefore the fastest, languages to learn for a native English speaker.

Page F30 argues that (bokmål) Norwegian was the easiest, because:

He also argues, in a subsequent article, that Afrikaans is nearly as easy:

The only reason either of these languages could possibly be considered "hard" is due to fewer learning resources when compared to the major languages (Spanish, German, etc).

Not the answer you're looking for? Browse other questions tagged reference-request native-language or ask your own question.

17
Is there evidence that learning a language written with the same alphabet as your native language can make you learn the language faster?

13
Are there studies testing to see what the the ideal age to begin learning a second language is?
22
According to scientific research, which languages take the least time to learn for a native Japanese speaker?
22
Is it easier for native Japanese speakers to learn Korean, or Korean speakers to learn Japanese?
9
Is it possible to learn a foreign language well enough to be indistinguishable from a native speaker?
9
Can passive speakers of a language gain native level fluency when learning it in their teens?
14
When does a native reach certain CEFR levels?