Is there a resource which describes Chinese dynasties which is suitable for HSK6 learners?

I'm working my way through a Coursera HSK6 course. In the first lesson of week 3, Professor Wang Yu offers practical advice about how to answer reading [阅读] questions, and among his advice is to gain a basic knowledge of Chinese dynasties (topics which commonly arise on the HSK6 exam). In this way, we can read and understand the passages more easily by recognizing e.g. names, places, events. 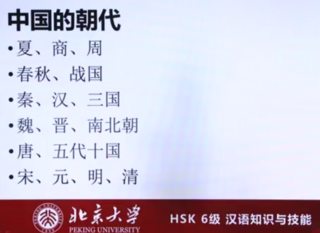 Question: Is there a resource which describes Chinese dynasties which is suitable for HSK6 learners?

If you want to know the names of the dynasties, there are plenty of rhymes you can find to help you memorize the order and solidify your knowledge of them. I found two that I've mostly translated below, and you can google around each one in English or Chinese to get more details on any of them.

I would also recommend trying to see how Chinese people learn about them when they are young. Watch a bunch of classic kids TV shows that talk about culture and try to learn some of the rhymes (like below) that people memorize when they're young. Look up resources for schoolkids that talk about history on streaming sites or comic books that talk about dynasties or wechat subscriptions that showcase illustrated lessons for middle schoolers. China has a really long history so some things are talked about a lot more frequently than others and it's best to maximize your time with whatever kids in China are also maxing out their time on.

My favorite classic is The 80s televised version of the Journey to the West, but the "history" you learn here might be more folklore than political. Still, some of the ancient history in China blends fluidly between "this man founded this city" and "he also moved a mountain with his own hands" just because it's so old, so I still think it can be helpful to know, like Nvwa and some of the more famous legends.

The Romance of the Three Kingdoms 三国演义 (Here is a link to the animated show ) would probably be more useful to you. It is translated in English and has tons of TV adaptations for people of all age groups so you can take your pick of how you get to know the stories, but once you learn the names from them you will find people refer to them a lot in pop culture outside of the original. It's a short period of time in history, but it's talked about often.

Alternately, sometimes looking up stories of idioms (成语) will sometimes give you cultural insight for who are the names you should recognize from different eras and looking up resources for teaching people in middle school or high school about this history can also help you learn new vocabulary.

If you just want to memorize the order, though, hopefully the following resources and translations help so you can at least recognize the names and orders easily and move on from there:

Eastern Zhou is split up into two parts:

Spring and Autumn Period and the Warring States

Split into three with the kingdoms of Wei, Shu and Wu

After this, dynastic rule extended with the Two Jins (Western Jin and then Eastern Jin)

The Northern and Southern dynasties were established at the same time

After that came the Song, Yuan, Ming, and Qing dynasties

Tang Yao Yu Shun, Xia, Shang, Zhou (I usually see the first two as just Yao and Shun without the full name- they are of the Three Sovereigns and Five Emperors period- 三皇五帝 in case you see it later)

We were unified under Qin, Han, The Three Kingdoms, and Jin

The Northern and Southern Dynasties were opponents

Then there were the Sui, Tang, Five Dynasties, and also the Ten Kingdoms Period

Not the answer you're looking for? Browse other questions tagged resource-request chinese or ask your own question.

2
Reading and Listening Resources for HSK 6 (B2)?

10
Is there an online resource that show which languages share the same alphabets?
9
Are there any web sites that connect language learners for conversation practice?
5
Are there resources to ask "Check my understanding?" questions not suitable for SE?
5
Is there much point in aiming for the HSK5 or HSK6 Chinese tests (assuming it's not required)?
3
Where can I find example answers to the Chinese HSK6 test composition 书写 (aka 缩写 or "question 101")?