How to remember a big list of grammar rules?

So the language I'm learning has a lot of endings. A lot. The suffixes for verbs and persons change based off of the word ending, the pronoun used, the object even, it's complicated.

What it boils down to is that I have to learn rules and a heck of a lot of them. I just have to sit down and learn every ending for every different type of word once and for all so I can form the present tense of any verb I come across, and then do that for all 13 other tenses with all 6 different types of words.

What is the most efficient way to memorise a set of rules like how I describe?

I'm not specifying the language since I'd like to ask this as a more general question, this is applicable to plenty of languages that have all sorts of word endings that just boil down to requiring you to learn a big list of rules for each word ending. I want to know the most efficient way to just sit down and learn the rules once and for all.

learning-methods grammar memorization
Share
Improve this question
asked May 26, 2020 at 11:08

Assuming you need to memorize some word forms such as Latin or German inflections, what I find to be key is the reduction of entropy, or uncertainty/randomness in the rules. When I need to memorize such grammar rules, I always start with this process:

Be creative and have fun exploring and coloring, and at the end you'll have something much easier to memorize. All of the regularity will be viewable at a single glance. If you can recall those shapes and the unique forms in the tables, then you can choose the right form from memory. After that, of course, you must practice. By regularly using the correct forms from memory, it will become automatic after a while.

I have two examples. First, these tables for German adjective endings from the excellent Hammer's German Grammar and Usage use the easier der, das, die ordering, and cells with the same ending are merged together to give sort of a jigsaw puzzle shape:

From my own own notes, I have a table I created for learning Thai consonant letters. I classified them using the phonetic features that they (originally) represented, and added colors for their tone classes, plus some notes. It looks very messy, but it made things extremely clear to me, which is what mattered. (Plus I put it in a spreadsheet and cleaned it up later anyway). 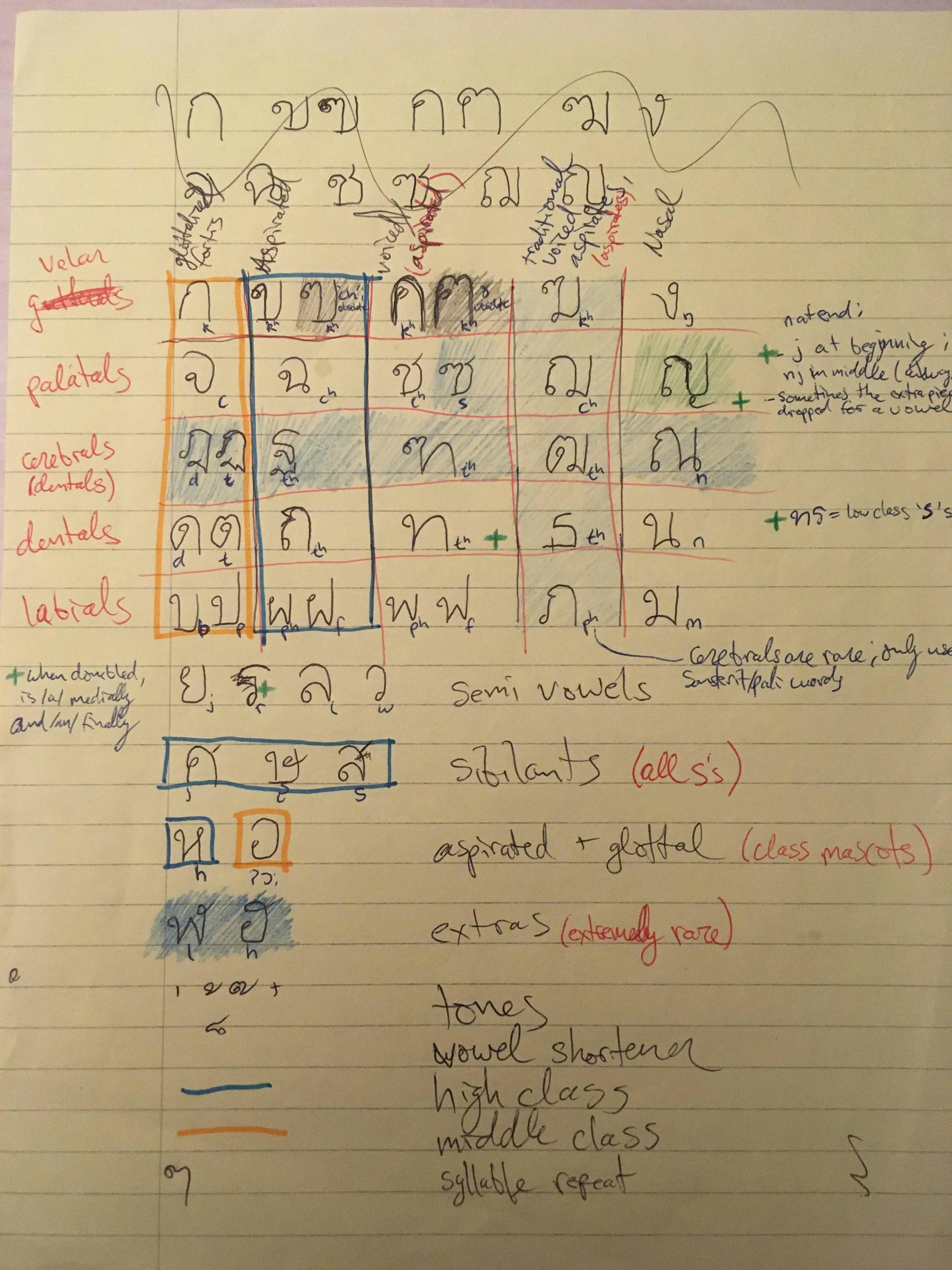 My native language has, thus far, managed to conserve many of its endings. We covered them in the school; maybe there was a couple of hours used on the fancy foreign names they have, but aside from that, no more formal teaching.

You should definitely know that the endings exist and have read through them, but I recommend exposure to the language as the primary way to learn them.

As a native speaker, I do not have a long list of rules memorized. As a learner of other languages, I also do not have such lists, aside from the -ons, -ez, -ent in French (thanks to a couple of years at school). Rather, one gets a feel for the language after sufficient exposure and use. So: Read and listen. Start writing and speaking when you can, too.

Note that the spoken language might very well have different or poorer endings than the written language. This is the case with Finnish, at least. So take care when listening.

You might want to use Clozemaster or some other learning tool that requires you to get the endings precisely correct. Duolingo is lax on diacritics and non-English letters (in Finnish, at least, a and ä, for example, are completely different letters), but maybe these are not a problem for your language. I recommend something that is not lax about such matters.

When you are advanced, start checking the grammar again

After you can read texts and follow them, and maybe even follow speech, you might want to start checking grammar again. The right point to check it is when you are surprised by something.

It might speed you up to memorize a couple of words whose patterns many others use. If there are highly irregular but common words, but only a few of them, maybe learn them by heart, too.

There will be some holes

This approach will mean that you will mostly learn those tenses that are actually used in wherever you get your exposure from. If you do not enjoy old or fancy literature, you might never have seen some rarer endings. But then, their value to you is presumably not too great, either. It might be the natives do not know them, for that matter, at least actively.

But if this is not acceptable to you, you might either look into old or formal writing, or alternatively learn grammar from a sufficiently exhaustive book or other source. But this is certainly very advanced study, similar to learning rare English words that have more commonplace alternatives.

TommiTommi
3,31111 gold badge99 silver badges3535 bronze badges
Add a comment  |
-1
Want to improve this post? Provide detailed answers to this question, including citations and an explanation of why your answer is correct. Answers without enough detail may be edited or deleted.

Keep using the grammar rule til it's too familiar, then go to the next rule.

Not the answer you're looking for? Browse other questions tagged learning-methods grammar memorization or ask your own question.

18
Positive vs. negative reinforcement in Duolingo
9
What resources can I use to master German word order?
20
How to remember words and improve my vocabulary
9
How can I put grammar rules into flashcards?
10
How many new words at a time?
4
Learning a lot of similar words in a short period of time
2
What are the effective ways to learn and remember any word. And use that in the right way
4
How to get most language learning benefits from frequent casual conversations with natives?
0
Struggling with learning, especially without outputting
1
Can someone learn English by listening?