I'd like an Anki cloze card design to learn verb conjugations where I have multiple card fields for:

Each card would show the infinitive and a table with each of the 6 present tense forms. Cloze deletion would blank one complete word at a time. One complete word is composed of the root followed by the proper suffix.

I can create these cards if I just create a table and type all the whole words for every verb of interest, but it would be convenient if I could create new cards for different verbs of the same form by just changing the infinitive and the root.

Is there a way to accomplish this?

The Anki documentation points out that overlapping (or nested) cloze deletions such as {{c1::Canberra was {{c2::founded}}}} in 1913 are not supported.

The simplest way to create conjugation cloze tests for a single verb (and tense) is to copy the forms from one of the many conjugation websites and then convert them into cloze deletions. Since the "Text" field in a cloze card can contain multiple lines, this is easy to do.

For example, you start with the form for the Spanish verb "tener" (simple present), copied from a conjugation website: 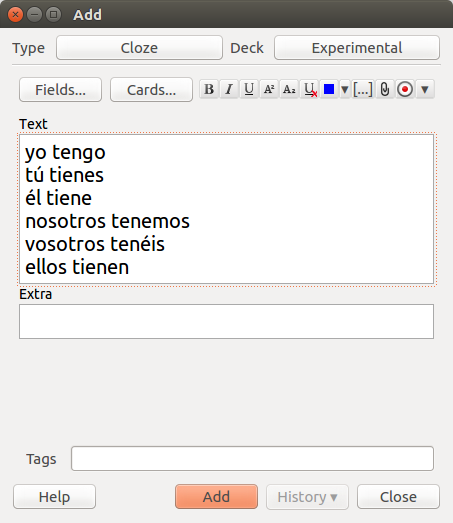 Then, one by one, you transform these verb forms into cloze deletions by selecting each form and clicking on the [...] button: 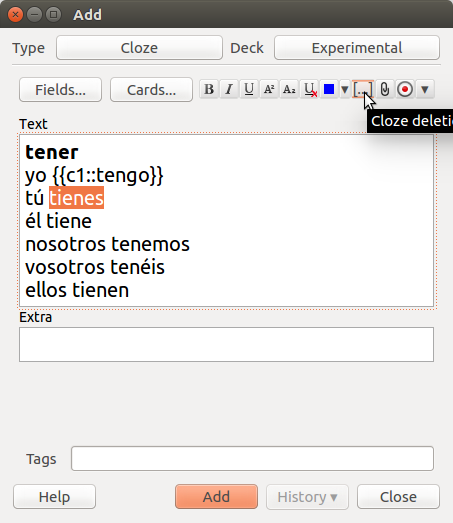 When you're done, each of the cloze deletion fields has a different identifier, namely c1 to c6: 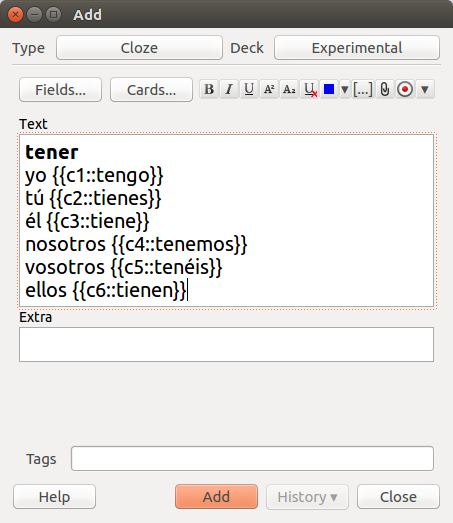 This results into six cards, one for each form, so when you start reviewing the verb "tener", all forms will be visible, except for the one being tested by the current card: 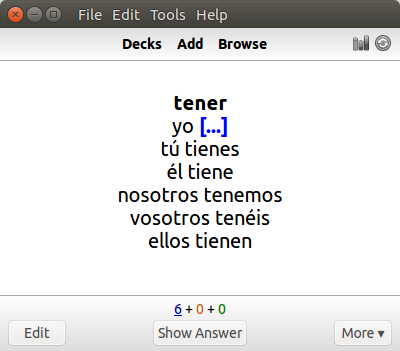 Not the answer you're looking for? Browse other questions tagged anki or ask your own question.

18
Is there any software for minimal-pair training?
14
Is it more efficient to make flashcards for L3 in L2 and L1?
4
Anki question: multiple words on cards or separate cards for each word?