I am attempting to teach myself Biblical Hebrew, and I have lately been memorizing the verb conjugations for strong verbs. I have found this chart extremely helpful in my endeavor. 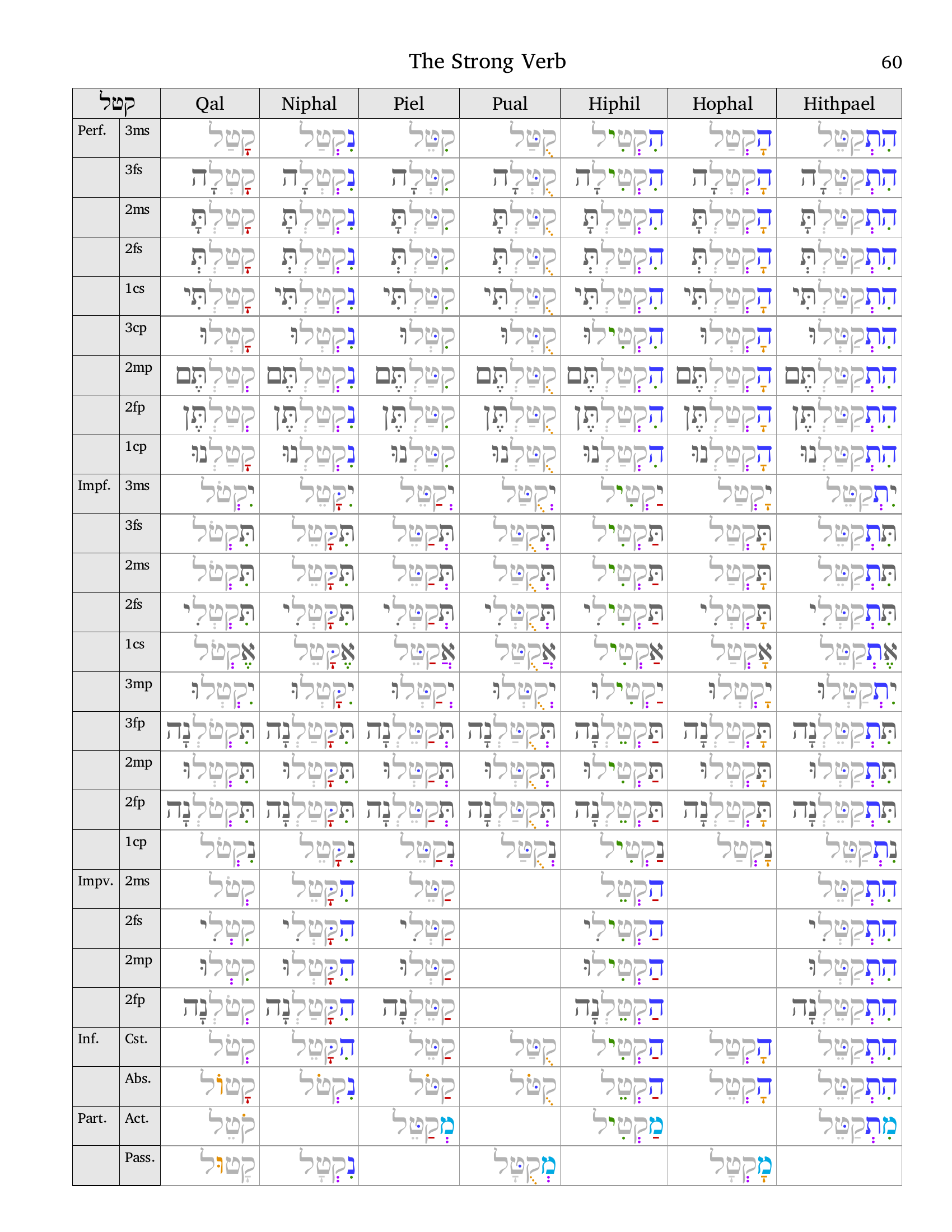 Through the help of the chart, I have first memorized the paradigm for perfect/imperfect Qal strong verbs, and am now trying to do the same for Niphal, and I'm planning on going through all 7 stems this way.

But, is this is the wrong approach? Would it be easier to focus on the Qal stem for all types of verbs instead of merely strong verbs? If so, can someone provide me with a simple chart like the one I'm using?

It's easier to memorize a pattern than a paradigm. Instead of memorizing the conjugation, you could memorize a rule to identify it. This is more useful when you're trying to understand a text, rather than to be able to express yourself in a language, but ability to express yourself is also better after a lot of exposure to the language, which would make memorization easier.

If you can remember the previous paragraph, and already know the qal conjugation, you can identify anything on the perfect/imperfect part of the chart. It might not be enough to express yourself perfectly, but is it good enough for reading?

Irregular verbs are also best remembered through patterns. It's probably not a good idea to ignore them in favor of regular tables, since you can't parse Biblical Hebrew well without having at least some knowledge of them. The first two verses of Genesis already have the forms בָּרָא (not *בָּרַא) and הָיְתָה (not *הָיְהָה) and מְרַחֶפֶת (not *מְרַחֶּפֶת). Your chart is also missing the so-called ו-consecutive conjugation (quite similar to the imperfect, but also different enough to pose a problem already at Genesis 1:3).

If you're looking for irregular verb conjugation, there is a collection of charts here that could be of use.

You should memorize two things:

This knowledge will give you 95% (I'm making up this number, but you get the idea) of what you need to know in terms of verb conjugation grammar. The rest are just irregularities that you'll learn as you come across them. In the end, you need to do extensive reading and speaking to get used to the language.

Not the answer you're looking for? Browse other questions tagged memorization hebrew or ask your own question.

11
Modern Hebrew before Biblical Hebrew?
4
Homonym Learning Techniques
13
How to make vocabulary acquisition fun?
7
How to learn conjugations?
4
Does memorizing French verb conjugations with the sound of English characters have negative impact in the future?
1
How to remember a big list of grammar rules?
4
Modern Hebrew: Where can I find a chart of all the verb conjugation rules in a single place?
2
Can you derive the pronunciation of Hebrew words from their Hebrew spelling?