Can I have C1-level proficiency in a foreign language even if my pronunciation is poor?

The Common European Framework of Reference for Languages and its A1–C2 scale is often referred to when discussing one's skill in a language. I've never been tested, but, based on the Wikipedia descriptions, I'd estimate that my Spanish skills are in the neighborhood of B2.

Wikipedia's descriptions, however, seem to downplay something I'd consider a major point of emphasis: how good is the speaker's pronunciation? How close to a "native speaker" must one be to achieve, for example, C1 proficiency? Is pronunciation explicitly evaluated as part of the exam, or is it ignored except when it is so bad that it hinders communication?

Pronunciation is indeed evaluated in the CEFRL tests. The specific criteria are available, and are reproduced for C1 below:

A sample assessment sheet shows what an evaluator might identify regarding the last bullet in particular: 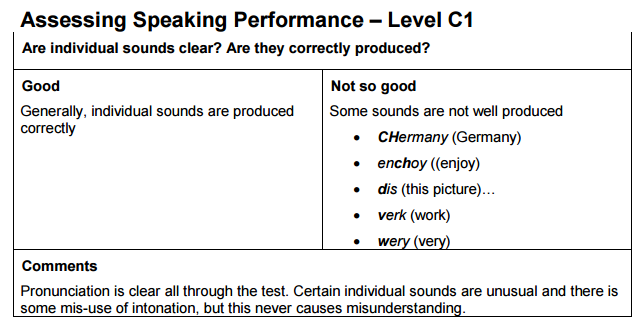 So yes, pronunciation is specifically evaluated as part of the CEFRL tests. Defined articulation standards must be achieved in order to pass the C1 test.

Yes, as long as it is not "unintelligble."

There are four competencies, reading, writing, listening, speaking, each weighted 25%. To pass C1, or any other level, you need a total of 60%, with at least 5% in each category.

I'm going to assume that the basis for your C1 evaluation is reading, and either writing or listening, and that speaking is your worst competency. In that case, you might score your 60% by getting 20%-25% in each of your two better competencies, and 5%-10% or more in your two worst, including speaking. "Poor" pronunciation would probably get you your 5% in speaking, although "unintelligible" won't.

The test is basically designed to test your "high water mark," or area of greatest competency. You don't have to be a C1 "across the board" to pass, so at least one area can be very weak as along as it is not weak "to the vanishing point." For some other person, of course, speaking will be an area of strength, and compensate for weakness in, say, reading and writing.

In the 2001 version of CEFR, the descriptor for "phonological control" for level C1 simply read,

Can vary intonation and place sentence stress correctly in order to express finer shades of meaning.

Of course, a learner at level C1 has also passed the lower levels. The descriptor for level B1 says,

Pronunciation is clearly intelligible even if a foreign accent is sometimes evident and occasional mispronunciations occur.

Has a clear, natural, pronunciation and intonation.

The descriptor for "sound articulation" for C1 says (my emphasis),

Can articulate virtually all of the sounds of the target language with a high degree of control. He/she can usually self-correct if he/she noticeably mispronounces a sound.

The descriptor for "prosodic features" for C1 says (my emphasis),

Can produce smooth, intelligible spoken discourse with only occasional lapses in control of stress, rhythm and/or intonation, which do not affect intelligibility or effectiveness.
Can vary intonation and place stress correctly in order to express precisely what he/she means to say.

This goes beyond mere correctness of pronunciation: you need to be able to vary intonation to express things such as surprise, doubt, irony, etcetera. A learner who is not able to do this cannot claim to have reached level C1.

Note also that the 2018 version of the CEFR no longer uses the language of a native speaker as the "gold standard"; in the CEFR in general "native speaker" was replaced with "other speakers of the target language" or similar phrases.

Not the answer you're looking for? Browse other questions tagged pronunciation exams cefr or ask your own question.