How can I improve my Arabic accent?

I am an Arab born in Europe. Unfortunately, this has affected my Arabic language skills. My accent sounds "broken", in other words: it sounds as if a foreigner is speaking Arabic.

I can have a basic conversation in Arabic, but can't go any further than that. I can't have educated and complex conversations as I do in English. It's very difficult to make Arab friends because of this language barrier.

How can I remedy this problem and reduce my foreign accent in Arabic?

My goal is to speak Arabic like a person who was born and raised in an Arab country.

If your main focus is on accent reduction, then one method would be to listen to native speakers and attempt to reproduce what they are saying. If you don't have anyone you can talk to in Arabic, then you could seek audio resources on the internet. Find a video or podcast, play the audio briefly, then pause it and try to repeat what you've heard as closely as you can. This will have two effects: it will help you practice correct pronunciation, and it will help you practice normal speech patterns. This will improve your spoken fluency overall.

With Arabic there is one specific issue I think I should address, which is the variety of accents and even dialects. You may want to focus on one regional accent, and limit yourself to resources in that accent. This will reduce accent confusion.

It's not really possible to speak a second-language with an accent that is 100% similar to the locals.

But you could try the following to improve your accent:

In the given answers many possible solutions or options have been quoted.

Before adding a few I want to point at an important point:
In the 20-30 Arabic speaking countries there are at least 50 different slangs and dialects which are far more in use than the so called (modern?) standard Arabic or fasih language اللغة العربية الفصيحة (which is the -written- language of the Quran and appears in literature, in the TV-News and Newspapers and printed media in first place) which has reached the usage level of Latin in Europe. So basically the (sound or correctness of the) pronunciation of what people consider Arabic may differ from a Country / Region / Location to an other.

Therefore you should first consider defining or thinking of what exactly you want to do? Learn a dialect? Learn fasih language and for what purpose you want to use it. Basically nobody use fasih language in everyday life nor in colloquial language, but you might be confronted to it in occasions (such as display panels and as mentioned before in some media). And usually people speaking these "Arabic" dialects will more or less pretend that their dialect is close(r) to the fasih language.

So you must make this decision first.

One important way to learn the correct pronunciation of the Arabic letters is mostly -only- taught via oral transmission by Quran-memorizers, as before one should first learn the correct pronunciation of letters before learning how to correctly recite a Quran verse this usually is called Articulation of sound مخارج الحروف which are said to be fourteen, sixteen or seventeen (3 different opinions). 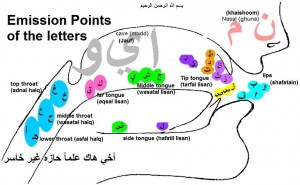 This is usually a matter of tajweed. And I don't know a better way to learn the correct pronunciation as good teachers of Tajweed are very severe and of course you need to practice in your spare time. (see also this link)

18
How can I develop an accent in a foreign language?
22
How do I lose an accent in a foreign language?
14
What can I do before I start learning a language to help reduce my eventual accent?
11
How to avoid an English accent in Hebrew
9
What techniques do accent coaches use?
5
Learning Arabic pronunciation with Franco-Arabic (chat alphabet)
6
Where can I find Arabic grammar exercises?
1
How to look up for Arabic words that have the same roots?
2
Problems pronouncing Arabic vowels correctly
5
What are some effective methods for improving one's accent?