What are estimates of vocabulary size for each CEFR level?

I could find one scientific article attempting this mapping (research paper of Milton J and T. Alexiou (2009), Vocabulary size and the Common European Framework of Reference in Languages), but its conclusion does not make sense to me. They estimate each level requires a linear increase of vocabulary size (an additional 500 to 1000 more words), which I consider is inconsistent with Zipf law and my personal experience.

I found this opinion of a blogger, where size doubles for each level. This makes more sense and is consistent with Zipf law. But it's really just an opinion:

Would you have any other references that quantify vocabulary size per level? Obviously the estimate may vary a bit with the language or with the method for counting the different lemma. Still I consider it would give a useful perspective, especially when aiming to B2 or C1 while learning with frequency lists or thematic lists.

I haven't found any official source to answer your question, but several members of online forums have explained their methods in estimating what they believe to be the number of vocabulary words you need to know for each CEFR level. The most prominent online resource is the research paper you referenced in your question, so I have excluded that from the websites that I'm listing here.

A user on this forum provides this estimate: 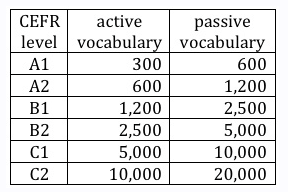 based on this methodology:

According to The Linguist,

There are different ways of measuring levels of proficiency in a language. There’s the European Common Framework of Reference which divides proficiency into six levels from A1 A2, B1 B2, C1 C2. In my view, B2 is where you are fluent, so that’s actually fairly far along...I know in English the difficulty level is roughly grade seven, grade eight and that the biggest factor in the difficulty level of any content is the vocabulary level. Granted, you could have complex sentences and complex structures, but I think the main difference, particularly if we’re talking about levels of fluency, is how many relatively less frequent words are used. In order to be able to call yourself fluent, you needn’t be able to read esoteric literature or scientific papers. You should, however, be able to read the newspaper and to do that you do need at least the vocabulary of someone in grade seven. That’s a fair number of words; it’s got to be 7,000 to 10,000 words in English.

Essentially, the article argues that approximately 7000 - 10000 words must be known in order to achieve a B2 or C1 level of fluency, which falls in line with the first estimate provided if the active and passive vocabulary is added.

There is at least one language test that I have taken that maps its own levels to CEFR levels and that defines the number of words you need to know, namely Hanyu Shuiping Kaoshi (HSK). HSK is a standardised test for Standard Chinese. Hanban, which administers the test for the Chinese Ministry of Education published a mapping between the 6 HSK levels and the 6 CEFR levels.

However, the Association of Teachers of Chinese in German Speaking Countries (Fachverband Chinesisch or FaCh) considers that mapping as too optimistic. So below is a mapping between HSK, the number of required words, and CEFR, based on the mapping by FaCh, which also matches my own experience. (See my website for a mapping that also includes Hanban's take on CEFR levels.)

So it will come as no surprise when I say that I wouldn't want to transfer the above vocabulary sizes for Standard Chinese to other languages.

They checked vocabulary of students that passed Cambridge exams at different levels so their results are empirical.

Vocabulary was checked by XLex test which is limited to 5000 lemmas so above numbers are lower bound.

Another source of gradation is: http://erfoundation.org/wordpress/graded-readers/

To get free access to material you need to register.

Just so you know where my opinion is coming from, I've been designing and teaching materials design using frequency-based vocabulary since 2008 and have given Nation's and similar levels tests to hundreds of students in several countries from true beginners to PhDs teaching EFL. I helped devise the bilingual Gujarati test that is on Nation's website and set up the levels testing for 12 colleges at University of Delhi. I've published 8 textbooks (most available as free download, if anyone wants to try them) using frequency-based tools. All that is to say, my opinion on this issue is descriptive, rather than prescriptive, based on what I've seen in my own work.

The goal in my testing has been to help learners become independent users who can gain new knowledge in English in an academic environment. In passive vocabulary testing across levels and cultures, I've had students consistently test much lower than prescriptive estimates while still functioning at adequate CEFR levels for their purposes.

In ESL classes, I've rarely had an PhD candidate in the U.S. test much above 3k words and, yet, they function, largely because they work in a sphere where they also know the technical/low-frequency vocabulary. For professors of English abroad, a few close to C2, many B2, others as low as B1, I never had more than one or two reach 10k. The vast majority were 3-5k if they were functioning as teachers. In some cases, teachers were below 2k (below B2), but they needed support at that level.

We still don't know exact numbers for each level, but, my estimates are these: Based on tests, it only takes about 600 headwords to carry on a simple conversation of the type IEPs often use for entrance interviews. I'd put those learners at A1. Students cannot read sufficiently at all without the first 1000, so this is the first goal. Once they are solidly there, they are generally low-mid A2 in other skills. A2 is a fairly quick phase. After that, it gets fuzzy, but they cannot reach B2 (independent user) without passive comprehension of the first 2000 (GSL). After that, we jump to focusing on the AWL. Beyond that, it really doesn't matter for most learners because, at B2, they can function in a mainstream academic setting reading authentic texts to learn new information in English and gain vocabulary incidentally. They will likely still need support in writing, but they probably don't need special materials or IEP classes for most purposes.

Between those two levels (low A2 - B2 independent), we only need to sort students broadly. It's ok for classes to produce at different levels. We just need them to all understand a similar level of input, i.e. the teacher and books. We see a natural break in classes around 1200, again at 1500, then 1800 and on to 2000+ the first half of the AWL, taking them from low A2 to high B1 and on to low B2. B1 seems to begin around 1500 and is a long, slow, broad level. It can easily take twice as long as the move through A2. Once they're into the AWL, they are generally low B2, but they can't be B2 without the 2k. I believe this is because they simply can't understand enough in context without the 2k to learn new words from context.

The table cited in the answer from @gavenkoa from Milton & Alexiou is a revised one from Milton & Meara 2003, but with no explanation for the revision (in the revised text). It is non-contiguous (note the gap between A2 and B1). The original was instead:

Active and passive vocabulary is an interesting distinction, but possibly without a difference, depending on how it is measured.

Paul Nation is the first scholarly name that comes to mind when discussing vocabulary frequency and learning the language, yet I don't recall him dividing frequency into CEFR scales.

Another source as has been mentioned is the English Profile project and you could literally go download their lists at each level and count the words that students can actually produce at a 60% accuracy rate.

The topic of use is crucial even though it is downplayed by scholars like Nation. There is really too much emphasis put on the frequency of the "token" and not the semantics. Since we all know a word often has a lot of meanings, and therefore that word is first used at A1 with one simple meaning and at C2 with another. What does it really mean to know the word then?

Finally, you could also look into the EGP grammar profile, which adds another dimension to the usage again. You can get a good reference from hundreds of examples and what the scholars say about them. I am often surprised by what they call a wide range of vocabulary for B1. Words that I would say are A1 beginner words, are often considered much higher as soon as a grammar point is connected to them such as a question form or past tense.

I hope this helps, and I am watching this discussion since I too am looking for a scale for an application I am building: https://englishgrammar.pro/file/

Not the answer you're looking for? Browse other questions tagged vocabulary cefr or ask your own question.

4
How many words per level of the European Language Framework?
-1
CEFR Frequently Used Words

5
Is there any evidence that vocabulary level is a good measure for predicting high economy income later?
5
Should I learn a whole bunch of new words at once with Anki?
7
What resources are there for learning Romanian in accordance with the CEFR ability levels?
6
How long between each CEFR level for learning Spanish?
6
How does the CEFR cater for the abilities of Deaf language learners?
5
Good strategies to improve vocabulary when at C2 level?
3
English words by CEFR level - open source