Should literacy in the L1 be taught before teaching reading & writing in an L2?

This question can of course be generalised to foreign languages other than English. Due to the high numbers of refugees in the last few years, the question has potential relevance to many foreign language learners.

I would appreciate answers based on research or experienced language teachers.

From general viewpoint, learning your L1 first and being proficient at it can help you with your L2 as you can associate L2 vocab with the L1 vocab as seen with methods like the Translation Method. This though does not apply always such as the direct method, which bans the usage of L1 while learning. You can though take some learning techniques you found helpful in being proficient in your L1 and apply them to your learning of the L2.

As seen in this dowloaded PDF, L1 is a factor in L2:

Arguments for the negative effects of L1

The article mentions a counter-argument to what I have said above though, that the process of learning another language versus learning our first language is quite different and thus, the learning techniques and habits from L1 will only interfere with the learning process of the foreign language:

Learning a second language…constitutes a very different task from learning the first language. The basic problems arise not out of any essential difficulty in the features of the new language themselves but primarily out of the special “set” created by the first language habits

Summarizing an old saying, habits can help you or hinder you. Now with a minimalist standpoint, we now get this:

…a person knows how to speak one language, say his native one; but in the early stages of learning his new one, there are many things that he has not yet learned to do…What can he do other than use what he already knows to make up for what he does not know? To an observer who knows the target language, the learner will be seen to be stubbornly substituting the native habits for target habits. But from the learners’ point of view, all he is doing is the best he can: to fill in his gaps of training he refers for help to what he already knows.

The minimalist view though also states that:

Odlin (1989: 22) argued that although they recognized that differences existed in the success achieved in L2 acquisition in comparison with L1 acquisition, they saw such differences as the result of factors such as motivation, anxiety about making errors, and the learner’s environment. The minimalist view seemed to imply that the way children acquired their L1 was the best method of learning a language, and that L2 learners should acquire the L2 the same way as children acquired their L1, rather than relying on their L1. Therefore, it seemed that both maximizing L2 input and avoiding the use of the L1 were necessary in L2 classrooms. This view was indeed common around the 1970s.

So not only from a linguist's (minimalist to be exact) standpoint is L1 vital for learning another language (in this case L2) as you should be learning your L2 like how you learned your L1, this was actually the current belief in the language learning classrooms of the 1970's.

Here we have another view which is kind of weird actually as it states:

Furthermore, unlike behaviourists who claimed that interference was caused by negative transfer of learners’ knowledge of their L1, Krashen and Terrell (1983: 41–42) adopted Newmark’s ideas and interpreted interference as the result of a strategy for communication, which learners used when they did not have sufficient knowledge of the L2. They also believed that the disadvantages of falling back on the L1 outweighed the advantages in the long run.

This viewpoint blames the student's lack of knowledge of the language they are learning (isn't that why they're learning) for falling back to their L1 and thus interference with the learning process. Another negative view:

Conversely, as Cook (2001: 409) said, using the L1 for classroom interaction was considered to be ‘depriving the students of the only true experience of the L2 that they may ever encounter’

Arguments for the positive effects of L1

Rather, it was developed to explain what took place ‘when two languages come into contact in the bilingual brain’ (James 1996: 143), since learners were found to be often curious about the relationships between the L2 and their L1 (Seliger 1983: 181)

This could be hard to see why this is under here but really, the learners are going back into their L1 to see what is similar between their native language and their newer language. This is technically, using your L1 to assist in learning your L2.

Later studies on CA (see, for example, James 1996; Kupferberg and Olshtain 1996, Kupferberg 1999; Doughty 1991) have been primarily concerned with engaging learners’ attention in the differences between the L1 and L2, and raising their cross-linguistic awareness by using cross-lingual teaching strategies, in order to facilitate L2 learning

Really here, the author shows that the learner can fall back onto their L1 and see any differences rather than similarities when compared to their L2. This supporting arguments are further strengthened with:

James (1996: 146–147) discussed effective ways to raise learners’ crosslinguistic awareness in L2 teaching: firstly, establishing a link between an L2 form and its corresponding L1 form can make learners conscious of the target form, and assist them in memorizing it, since the relationship between the L1 and L2 is often asymmetrical; secondly, translation can be particularly effective, since two manifestations of the L1 and L2 are juxtaposed in the act of translation and language juxtaposition is the essence of CA.

Again, linking L1 with L2 and learning based on the found links and the links that are not there (differences). With the above in mind, researchers developed the following graph: 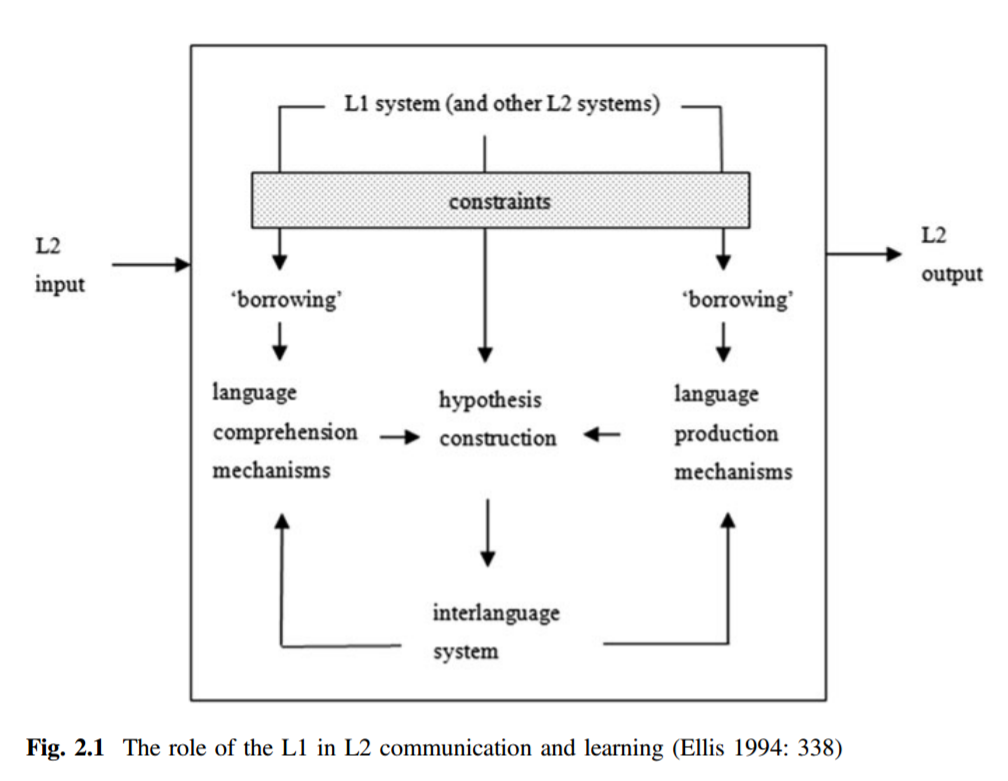 and three other graphs to compare the lexical and conceptual levels of learning based on the first of five graphs below: 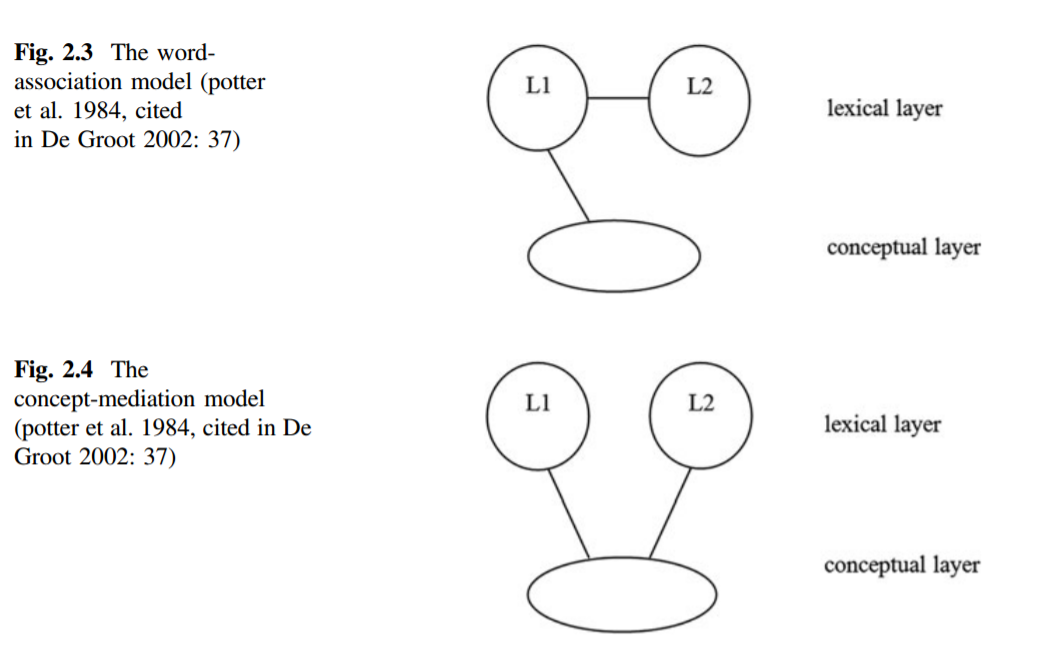 With four graphs showing how L1 can be interrelated with L2, it is now easy to show the benefits of being literate at L1 first.

In a review article published in 2000, Lantolf summarized the current state of understanding on mediation through the L1 and suggested that ‘it does make sense to recognise that the L1 plays a key role in helping learners to mediate each other, and … themselves, in the appropriation of another language’ (Lantolf 2000a: 87). More importantly, he pointed out (2000a: 87) that learners’ L2 proficiency is not the only determinant of the use of the L1 for mediation since language is strongly implicated in their identity as thinking beings.

The relationship between L1 and L2 acquisition is important, because it affects L2 learning and teaching. If L2 acquisition is no different from L1 acquisition, it is felt that L2 learning and teaching should be based on the features of child first language acquisition. Concerning this issue, while some researchers, such as Dulay, Burt, and Krashen, have emphasized the similarities largely based on the evidence for developmental sequences (Odlin 1989: 21), others have pointed out that L1 and L2 acquisition may differ in many aspects. For instance, Dodson (1972: 59) provided a comprehensive description of the differences between L1 and L2 learners: 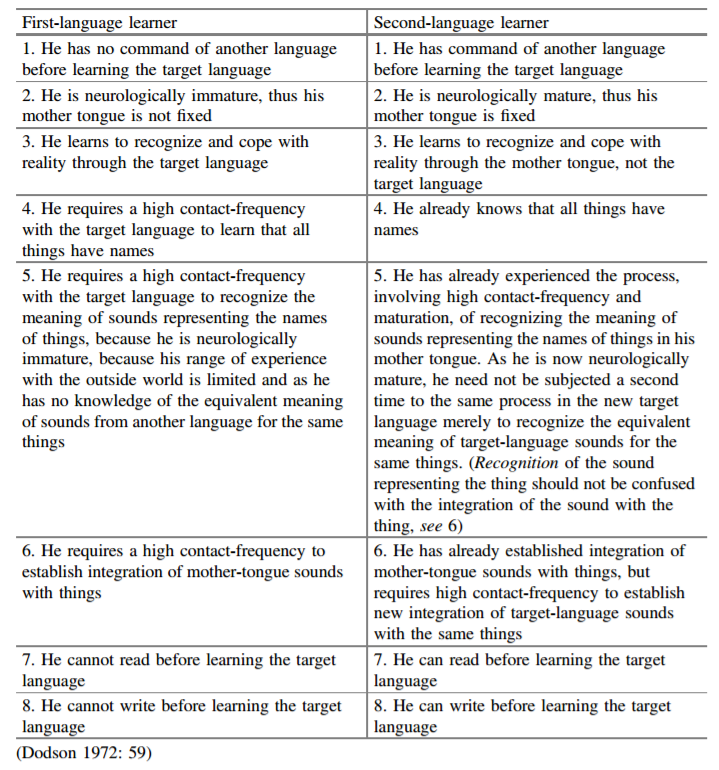 Given what has been presented (including the article and its information), being literate at your L1 should be beneficial towards learning a new language. Remember though, this answer is based on a study on L1 and L2 only.

Not the answer you're looking for? Browse other questions tagged reference-request teaching-methods literacy l2-acquisition refugees or ask your own question.

6
How can lay teachers help migrants learn a new language?
17
Are there any surveys or studies on what motivates people to learn minority languages and/or rare languages?
6
What is phonics?
13
Teaching the Present Continuous before the Simple Present?
8
What are the main causes of foreign language anxiety in learners of Chinese?
2
What are some of the most useful methods of teaching English grammar?