Printable keyboard layout for Ukrainian on a MacBook Pro [closed]

Ask Question
Asked 4 years, 8 months ago
Active 4 years, 5 months ago
Viewed 471 times
3
Closed. This question is off-topic. It is not currently accepting answers.

Want to improve this question? Update the question so it's on-topic for Language Learning Stack Exchange.

I want to be able to type efficiently in Ukrainian on my MacBook Pro computer.

If possible, I want to just print out a piece of paper that's at the same scale as my actual keyboard, and lay it over my keyboard when I need to use it.

Do such resources exist, and if so, how do I search for them? What keywords should I use?

I can find a diagram of what a Ukrainian keyboard more or less looks like at http://en.ukrlandia.com.ua/russian-ukrainian-layout-mac/ , but it doesn't look like an exact match.

Update: Turns out what I want, if purchased, is called a "keyboard cover".

Once you've installed a keyboard layout on Mac, you can print it out via the toolbar button on the view layout window. 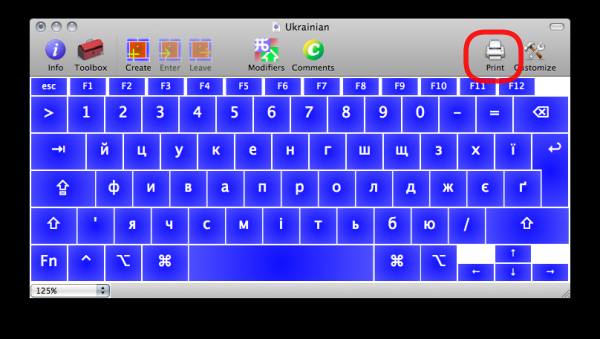 The standard Mac layout for Ukrainian is awful:

The solution is Ukrainian Typographic Layout (Windows/Mac) based on Ilya Birman's typographic layout (the latter is a huge topic, see below).

I actually use it myself (a derivative of). It is a combined Ukrainian/Byelorussian/Russian layout. For example, I have Ukrainian і placed on S, while Russian ы under AltGr+S.
At the same time, UA/BY/RU в is under D, while AltGr+D gives me a Byelorussian ў.

Note. There are different layouts available, they differ on what is "default" and what us under AltGr — either it is Ukrainian or Russian, depending on what language you type more.

Offtopic, in addition, this layout quickly makes you familiar with “extended” punctuation marks like «double quotes», ½ fractions, and so on…

Once you've got it installed, just print it as specified in the above chapter.

Caveat: most sites on the topic are in Russian, so you need some online translator to employ.

Not the answer you're looking for? Browse other questions tagged ukrainian keyboard-layout or ask your own question.

12
What differences are there in the difficulty of learning Ukrainian and Russian to a very basic level?
11
Which version of the Arabic keyboard on Windows 10 is most like Modern Standard Arabic?
9
Is there a typing tutor for Modern Hebrew?
1
How to get started with Ukrainian alphabet?