Are second languages processed the same way as first languages?

Everyone who is cognitively normal is capable of learning a language natively. The fact that humans seem to have an innate capacity to learn any natural language is one of the underlying principles of Chomsky's Universal Grammar.

So, does a given person process their second languages (learned after childhood) the same way as their first/native languages?

This is an open question in SLA, which even further depends on a person's fluency in a given L2, although most would agree at least some similarities are shared.

At some level, certain processes are shared between L1s, and L2s, as the answer to the question linked in this question states. Broca's and Wernicke's areas, regions of the brain responsible for speech production and comprehension, respectively, are activated in both L1 and L2 processing, although there are some differences. (Not only that, they are used in signed languages as well.)

This is studied through the acquisition of features of a second language (gender, case marking, definiteness, etc.), and how well learners use them. Think of stereotypical errors like Russians dropping "the" and "a" in English.

There are two main schools of thought.

Language processing can be studied through a number of neuroimaging methods, primarily functional magnetic resonance imaging (fMRI) and electroencephalography (EEG). EEGs can be used to measure Event Related Potentials (ERPs), which are located by averaging neurological responses following a type of stimulus, which allows researchers to extract the signal from the noise).

ERPs do not tell us what is being activated - the electrical signals are smeared all over - but can be used as evidence that the same process is occurring between stimuli/individuals.

ERP studies have identified two major responses to linguistic anomalies: The N400 (negative-going, 400 ms after stimulus) and the P600 (positive-going, 600 ms), which occur in response to semantic and syntactic errors, respectively.

For example, the N400 (in native speakers) would occur after the word bake in the sentence below (since cats can't bake, but subject-verb agreement is OK).

# The cat bakes the cake.

However, the P600 occurs after structural errors, for example, below:

* The cat eating the cake. 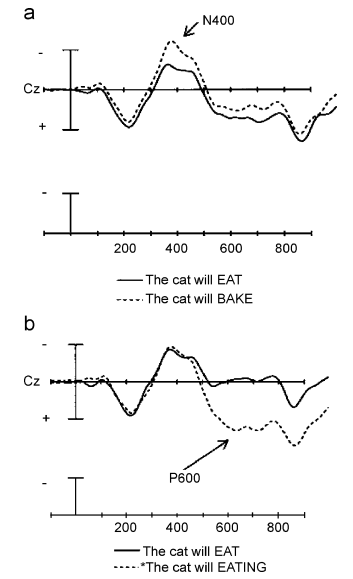 L2 learners, however, start off with N400 (semantic) responses to anomalies like the second one. This is because they rely on declarative memory to identify words in context, rather than procedural memory to break eating down into eat + ing.

In other words, they first learn all the forms of a verb by heart (eat, ate, eating, eaten), then, as they gain fluency, begin to use syntactic procedures to parse a sentence.

To summarize, early L2 learners process some elements of their L2 differently, relying on memorizing words to understand. More fluent L2ers begin to acquire native-like processing abilities, although the timing and onset of those abilities vary with demographics such as age, age of acquisition, innate ability, motivation, etc.

Not the answer you're looking for? Browse other questions tagged resource-request grammar theory or ask your own question.

20
Does learning a second language happen in the same part of the brain as learning a first language?
10
What is the Representational Deficit Hypothesis?

6
Is there some software or book that lists words in the same family as a given word?
10
Is there an online resource that show which languages share the same alphabets?
8
Studies on average time by full immersion in 2nd+ language to become conversant?
5
Original source of Arguelles' statement about learning at least six languages
4
Does memorizing French verb conjugations with the sound of English characters have negative impact in the future?
9
Why learn English grammar first? Just gets in the way