How does language ability decrease when one stops actively learning?

Sometimes for various reasons one could not continue to learn as actively as he/she wants and will drop the activity of learning almost entirely except for sometimes reading some lines in the target language to try to maintain his/her level. It is no doubt that if the learning is not done on a regular basis, the language skills will dwindle quite fast.

In the case where one has something like a limited proficiency level in that language (so that he/she can read almost everything with little troubles, I mean he/she can read quite accurately but reading can be slow at time compared to his/her native language).

Can doing a pause in learning be really disastrous? Would the language come again quickly when he/she would resume his/her activity?

Until now, the only experience I have about that question is that I used to learn Spanish and I was quite good in passive skills (oral and written comprehension), now, 5 years later I can still read Spanish (but not to my previous level, I would say that I can read B1 materials) but I could not speak a single word in it save for trifles.

There is no cut and dry answer as forgetting a language differs from person to person, but it is common to forget a language when it isn't use to a certain degree[source]. Interest and motivation also play a role. Instead of describing, here's a picture which shows the decline of memory over time.

Here's the typical "Forgetting Curve (scale might be off, but just to get the idea): 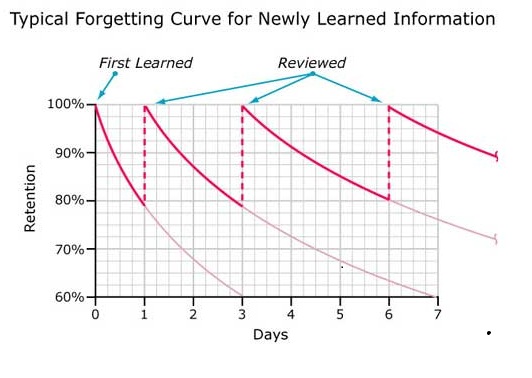 "Reviewed" in this case simple means to recall or bring to mind the information. It does not really mean you opened up a textbook and re-read the chapter.

So yes, you can, but the deterioration rate differs for everyone. If you have a passion for a language you will remember it more[source]. You most probably won't completely forget a language over time, but it is definitely possible your vocabulary in that language will decrease.[source].

A break in learning can be disastrous but they are a lot of factors in play including what I mentioned before. If you are learning a lot new material, chances are you will forget it unless it is reinforces

Take a look at this question for ways to avoid forgetting a language.

Not the answer you're looking for? Browse other questions tagged reacquisition learning-break or ask your own question.

60
How can I prevent myself from forgetting a language?

60
How can I prevent myself from forgetting a language?